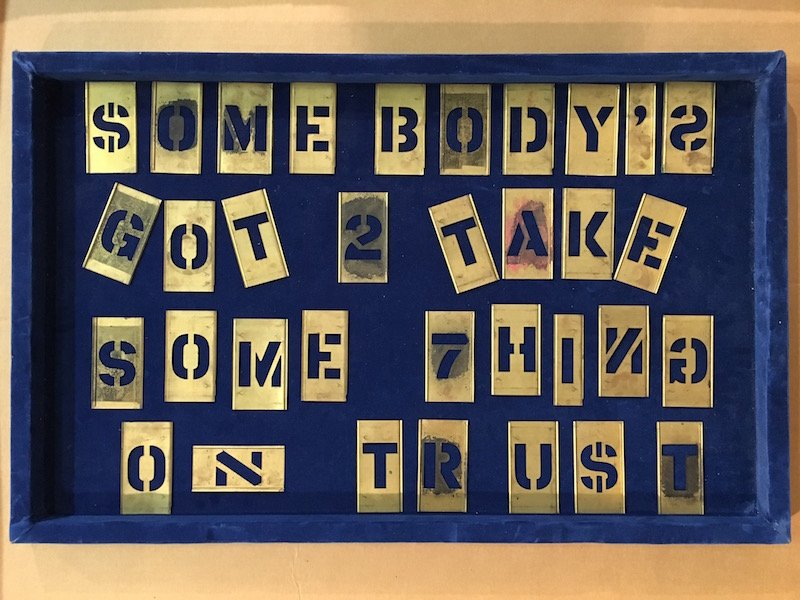 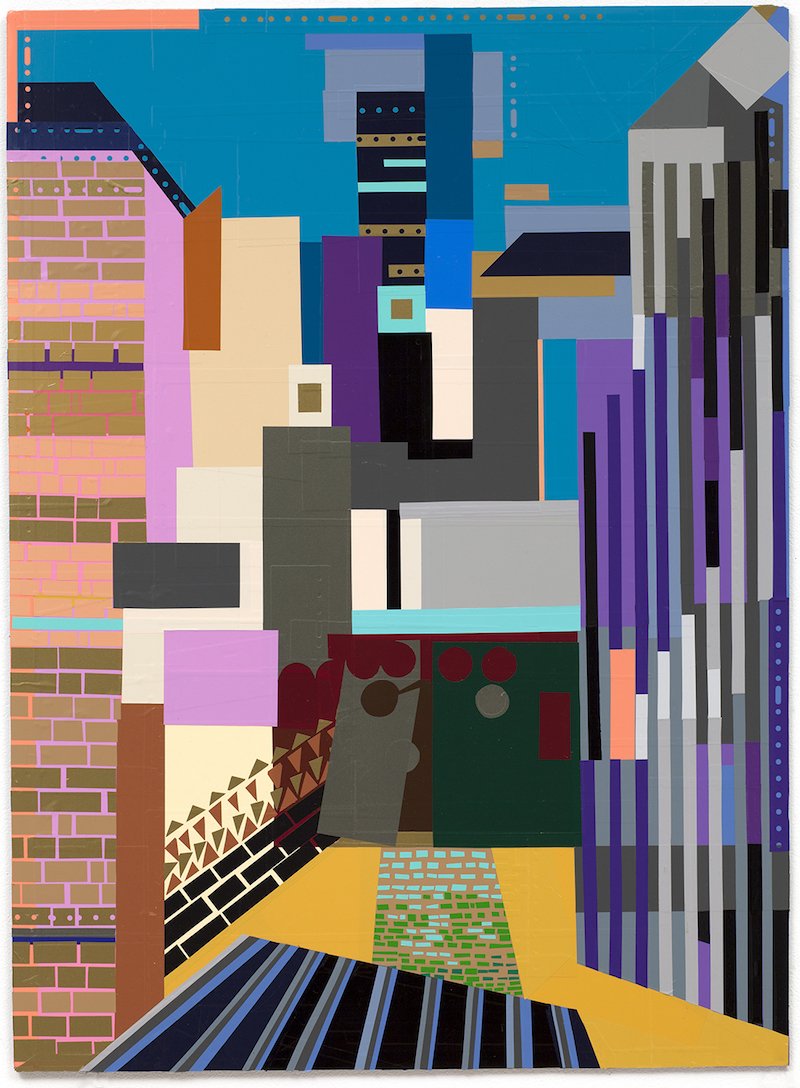 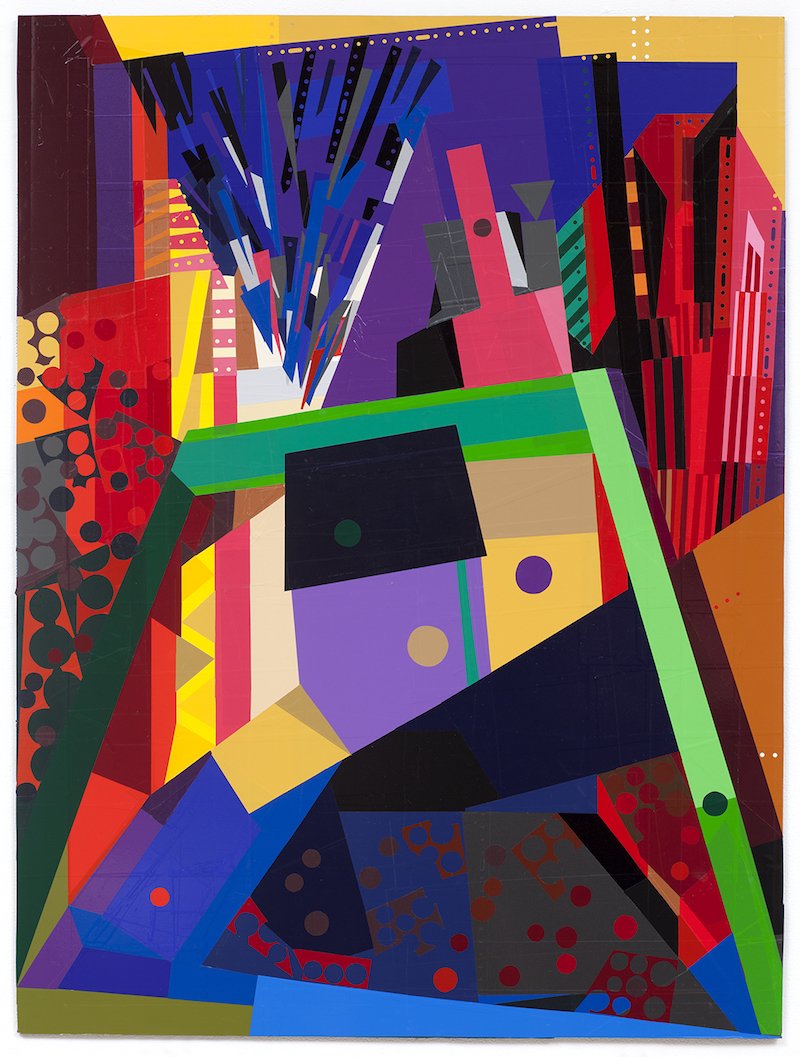 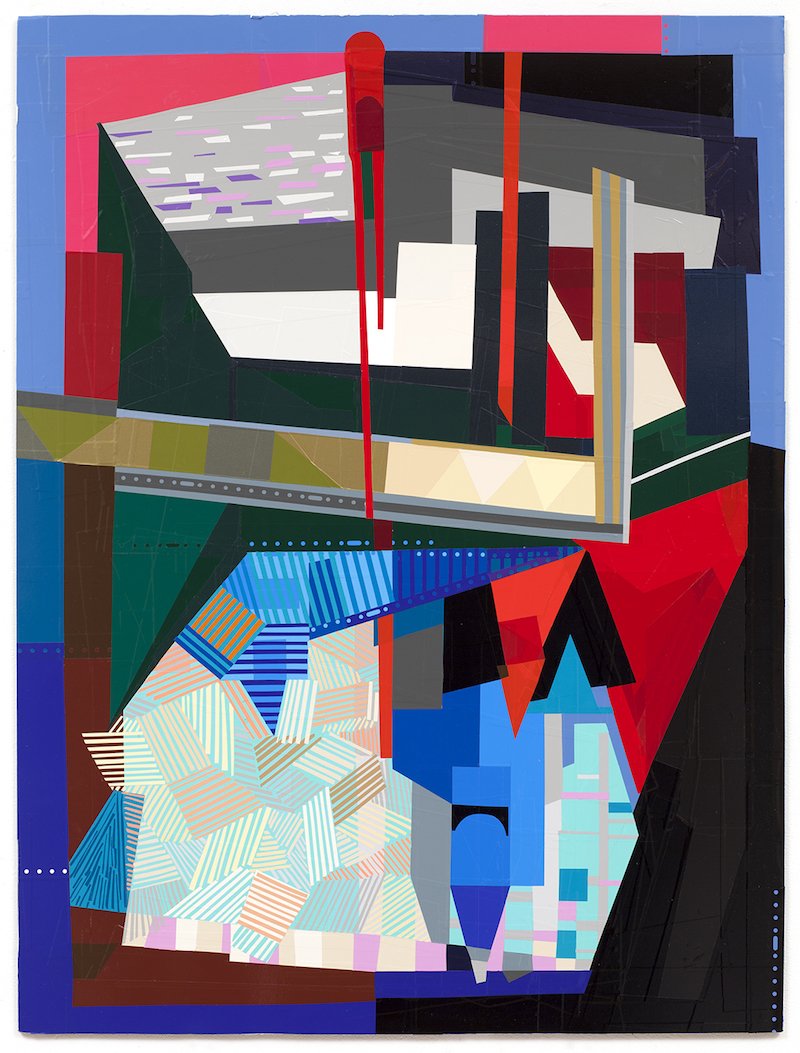 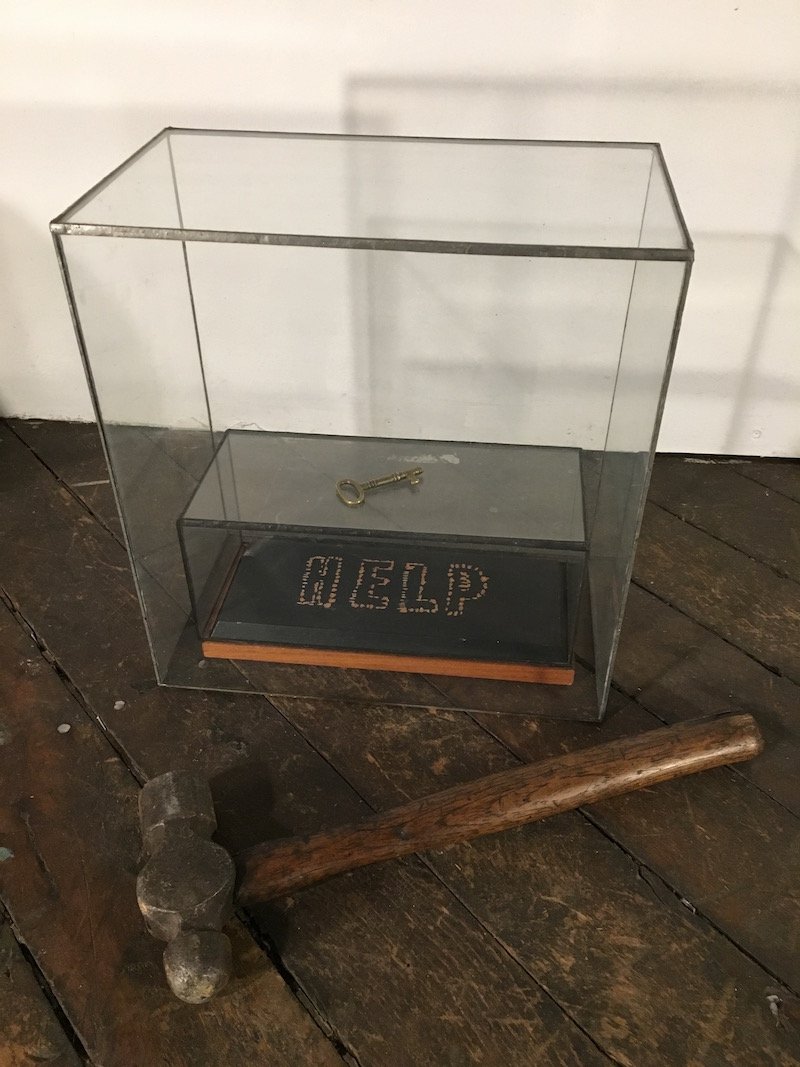 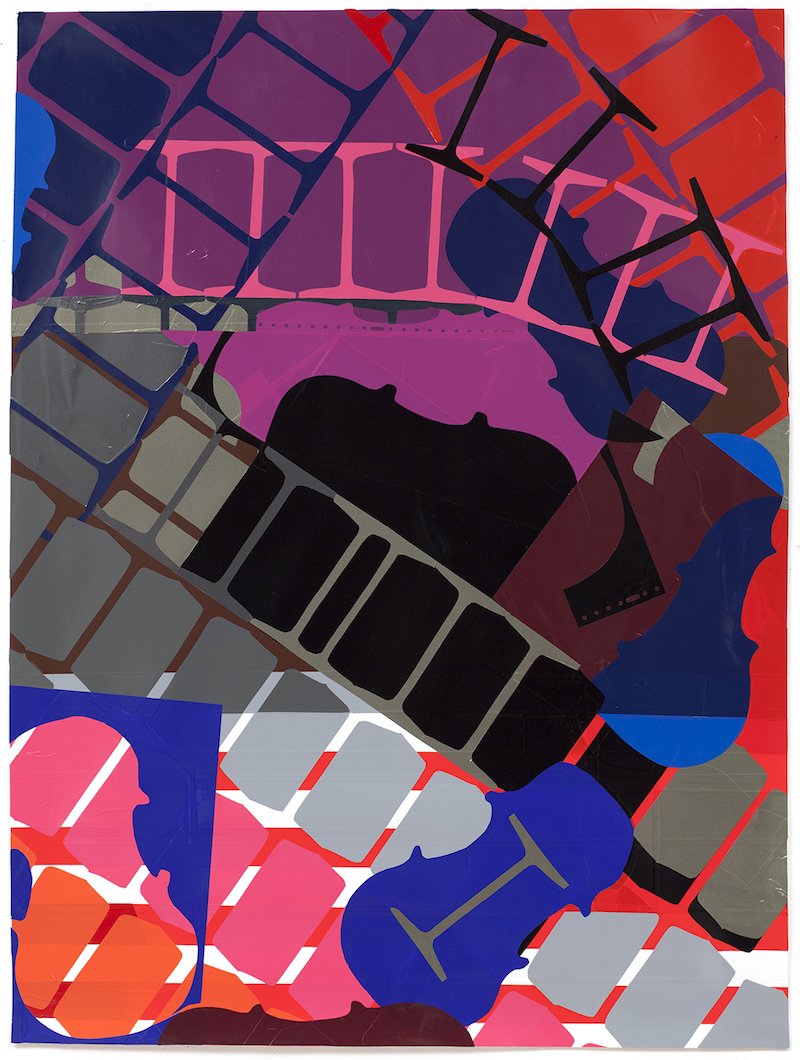 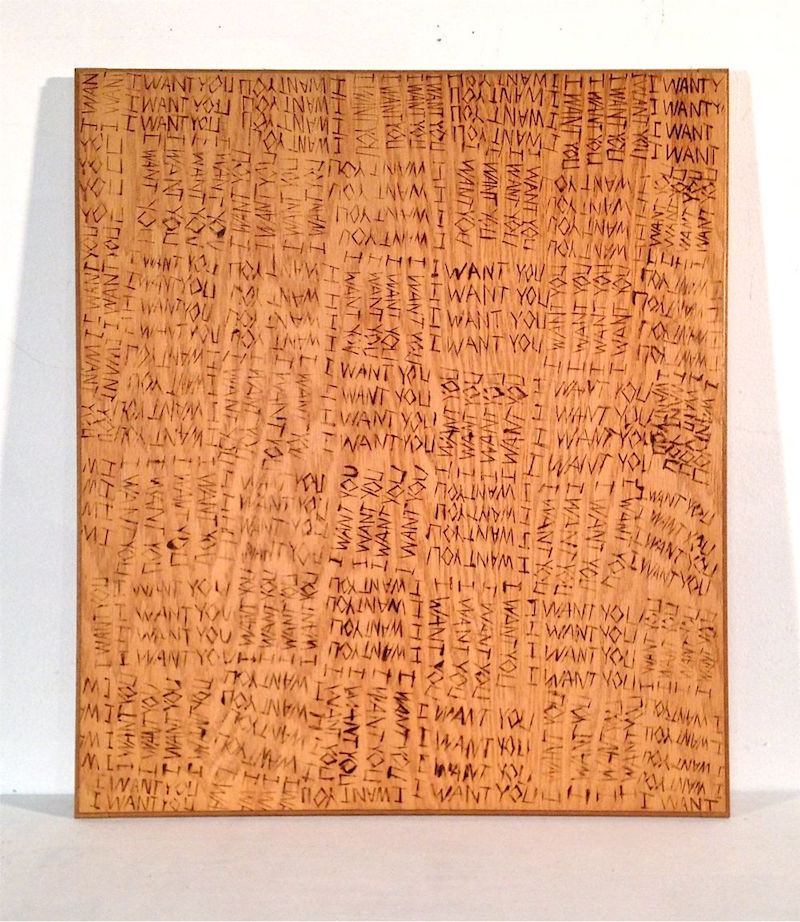 Once the lockdown last March forbade me to return to my studio, I sensibly packed up supplies to continue making my “paintings” of colored vinyl at home.  I was grateful to have an empty bedroom where I could set up work. I expected to easily segue into another piece, and, for a while, I adapted.  But the walls were too close, the responsibilities of home life too impinging. The brash, impetuous child who prowls and teases me in my studio was nowhere to be found.

I’d been ill over the winter and my energy was low.  It was hard to get started, and my painting’s sluggish progress dismayed me.  I made pencil sketches every few days for reassurance. As April advanced, I took longer walks outdoors and observed the sun rising ever higher.  To build back my strength, I began to shovel the leftover leaves into giant bags, and I bemoaned the bare soil.

In the kitchen, I’d been coaxing scallion shoots to regenerate in a glass of water.  Worried about food shortages to come, and unwilling to venture out, I ordered seeds on line and planted them in egg-crates.  They sprouted slowly and indifferently, then all at once.

I would need to turn new soil in order to plant further from the house in our lone ribbon of sunlight. I composted and fertilized and pledged fealty to organic methods.  I shifted clods of grass and pachysandra to bare spots elsewhere throughout the yard.  From my careless handling, few seedlings thrived in their new beds and containers. But each new stage of development raised new hopes.

My husband hacked down trees to let in light.  I moved stones and rocks, marked new paths, and cultivated around worn-out shrubs. I fenced in the spidering strawberries to usher in next season’s fruit.  Voles and chipmunks munched the arugula, rabbits nipped off the two rosebuds, and slugs invaded the kale.  A mother raccoon and her pups nested for a week in the hollow chestnut tree.  I watered faithfully, and probably illegally, through drought and more drought.  A coyote slunk through early one October morning. I slept better and walked further as the seasons moved on.

It seemed that competition and insecurity on these levels I could deal with.  It was time to let go of regrets about the painting upstairs. I was waking up each morning pulsing with the changes in the plants and their surroundings. I lay in bed and formulated new projects for the day.  In a world determined to wear us down, the garden was a place for caring, reliability, hope and resistance.

It was humbling to work with scarcely any budget.  Instead, I divided and transplanted plants already successful in the climate.  I cadged and scrounged for cuttings and structures that I could relocate or repurpose.  I looked at other gardens. When I found a better method, I substituted it for the one I’d been using.  Given the time to reevaluate my past choices, I was more attuned and able to invent ways to ameliorate the old problems. I found I was acquiring new knowledge, taking risks and loosening my self-imposed constraints.  It was okay to learn from failures.  Don’t invest too much, don’t waste time getting angry, try a different approach.

Where my visitors notice the scraggly trees, the clumps of grass and ragged shrubs, and the crumbling parapet of a cinderblock garage jutting over the eroding hillside, I see shackles to liberate— tree roots straining under tired soil; vines choking the jacks-in-the-pulpit; stones waiting to be gathered and stacked in terraces to hold back the rain. Puttering through the seasons, I watch the plants grow taller, denser, brighter, blossoming in contrasting patterns and agglomerating into related forms.  I entertain myself by cutting and shaping, filling and emptying, and multiplying the possible points of view within a limited space.

Had I not let myself wander outdoors, I might have succeeded in finishing the painting upstairs. But the garden kept whispering of new pleasures and awakening new impulses. Today, I write looking out the window as the first snow loads branches still heavy with leaves. I wonder what next year will bring.

The garden has inspired my virtual, live-streamed project on Zoom for Waltham Open Studios. In collaboration with my good friend Tim Tsang, we are offering an equivalent to the drifting conversations of previous years in my Waltham studio space.  Please join us on Zoom, November 8 to explore that­­­ elusive, direct and bodily experience called art.